Usher To Chris Brown: 'Have A Little Remorse, Man' 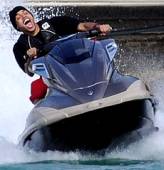 Usher isn't too pleased with photos of Chris Brown smiling and riding around on jet skis in Miami.

Appearing in a video for Jermaine Dupri's 'Living the Life' series, Usher talks about the troubled 19-year-old singer: "I'm a little disappointed in this photo after the other photo?," he says referring to the leaked Rihanna (photos

"C'mon, Chris. Have a little bit of remorse, man. The man's on jet skis? Like, just relaxing in Miami?"

Brown and Rihanna spent the weekend in Miami, staying at Sean 'Diddy' Combs' mansion on Star Island, apparently working toward a reconciliation.

The two reportedly left Miami for Los Angeles together -- on the same plane. The singer is to be arraigned Thursday for assaulting Rihanna on February 8 in Los Angeles. Prosecutors are awaiting evidence from LAPD before deciding to file charges.