Usher Defends Justin Bieber: 'He Is Unequivocally Not A Racist' 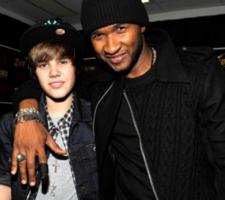 Usher, who admitted in an interview that he didn't like "some of the things" he hears about Bieber, is defending his investment.

"At my core, I am a person that supports growth and understands without judgment, that growth often comes as a result of pain and continues effort," says Usher on Instagram.

"As I have watched Justin Bieber navigate difficult waters as a young man, I can tell you that he hasn't always chosen the path of his greatest potential, but he is unequivocally not a racist."

"What he was 5 years ago was a naďve child who did not understand the negative power and degradation that comes from playing with racial slurs," he continues. "What he is now is a young man faced with an opportunity to become his best self, an example to the millions of kids that follow him to not make the same mistakes."

Usher's statement comes as Bieber faces fresh criticism after a second video leaked with the singer repeatedly saying the N-word.