US Women's Soccer Team Sues For Equal Pay: 'It's Our Responsibility' 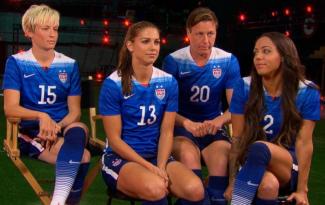 Carli Lloyd, Becky Sauerbrunn, Hope Solo and Alex Morgan, along with their attorney Jeffrey Kessler, appeared on the 'Today' show to expand on why they filed the lawsuit, saying it was their "responsibility... to push for equal pay."

"These women are very disappointed in U.S. soccer," their attorney told Matt Lauer. "When they asked for the same treatment as the men, they were told it was irrational. Now that might be a good answer in 1816. It's not acceptable answer in 2016."

"I think the timing is right," Lloyd said. "I think that we've proven our worth over the years. Just coming off of a World Cup win, the pay disparity between the men and women is just too large. And we want to continue to fight."

"I've been through numerous CBA negotiations, and honestly not much has changed," added Solo. "We believe now the time is right because we believe it's a responsibility for women's sports, specifically women's soccer, to really do whatever it takes for equal pay and equal rights and to be treated with respect."

In a statement, the U.S. Soccer Federation said: "While we've not seen this complaint and can't comment on the specifics of it, we're disappointed about this action. We've been a world leader in women's soccer and are proud of the commitment we've made to building the women's game in the United States over the past 30 years."