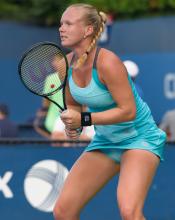 US Tennis is apologizing after playing a Nazi version of the German national anthem during the Fed Cup.

The stanza of the anthem sung translated to "Germany, Germany, above all, above all in the world." The line, associated with the Nazi regime and Adolf Hitler's Third Reich, left some players fuming.

"I thought it was the epitome of ignorance, and I've never felt more disrespected in my whole life, let alone in Fed Cup, and I've played Fed Cup for 13 years now, and it is the worst thing that has ever happened to me," Andrea Petkovi, who was born in Bosnia, said.

She said she considered walking off the court as the anthem went on.

The USTA said it "extends its sincerest apologies to the German Fed Cup team and all of its fans for the performance of an outdated national anthem prior to today's Fed Cup competition. In no way did we mean any disrespect. This mistake will not occur again, and the correct anthem will be performed for the remainder of this first-round tie."