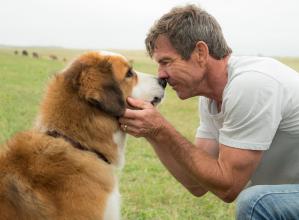 Universal Pictures and Amblin Entertainment have cancelled the premiere for 'A Dog's Purpose' amid controversy over a video that showed the mistreatment of a dog during filming.

PETA has called for a boycott of the film after a leaked video showed a terrified German shepherd being thrown into the water and forced to perform in artificial rapids.

"He wants to get away, just throw him in," a voice in the background of the video says.

Josh Gad, who voices the dog in the film, says he found the footage "disturbing."

The actor said he signed on to the movie because he saw it as "one of the most beautiful love letters to animals I have ever seen."

"While I do not know all the details and cannot speak to the level of care and caution that went into this moment, I am shaken and sad to see any animal put in a situation against its will," he said. "I have reached out to the production team and studio to ask for an explanation for these disturbing images."

The studio says it is cancelling the premiere "because Amblin's review into the edited video released yesterday is still ongoing, distributor Universal Pictures has decided it is in the best interest of A Dog's Purpose to cancel this weekend's premiere and press junket."

"Amblin and Universal do not want anything to overshadow this film that celebrates the relationship between humans and animals."

"Since the emergence of the footage, Amblin has engaged with many associated with the production of the film, including safety personnel, trainers and stunt coordinators as part of their in-depth review. While we are all disheartened by the appearance of an animal in distress, everyone has assured us that Hercules the German Shepherd was not harmed throughout the filmmaking."