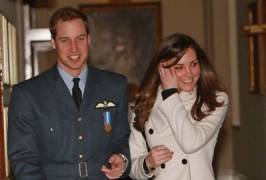 After being a couple on and off for nearly eight years, Prince William and Kate Middleton are finally engaged.

An official statement by royal officials also adds that "the wedding will take place in the Spring or Summer of 2011, in London."

William proposed during a holiday in Kenya last month and gave Kate the oval blue sapphire surrounded by diamonds from jeweler Garrard that his mother, Princess Diana, once wore.

Middleton is the daughter of self-made millionaires. Her father worked for an airline and her mother was a flight attendant before they started a mail-order business specializing in children's parties.

The two met more as students at the University of St. Andrews in Scotland. The 2011 wedding date avoids both the Olympics and Queen Elizabeth II's Diamond Jubilee, both due to be held in 2012.

An important factor as the ceremony is expected to be the biggest since William's mother, Diana, married Prince Charles.

Prime Minister David Cameron said he was delighted by the news, and sent the couple his best. The pair is expected to live in north Wales, where Prince William will continue to serve with the Royal Air Force.

William, who is second in line to the throne, once told an interviewer he wouldn't marry "until I'm at least 28 or maybe 30." He turned 28 in June.