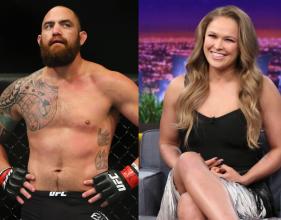 The UFC fighters got engaged while on vacation in New Zealand last week.

"We were under a waterfall in New Zealand and it felt like the right place to do it," Browne told TMZ.

Rousey added that the wedding would be "soon.".

"I don’t know what goes into planning a wedding," she said. "It could be really easy, because I don't really want a lot. We don't really need decorations or flowers; just somewhere to go, something to eat and some people around."

The pair had been dating for two years. Rousey hesitantly confirmed their relationship to ESPN in October 2015 but said she didn't like talking about her personal life.

"I don't talk about my personal life much. That's why it's called 'personal life.' It's true that Travis and I are in a relationship," she said at the time. "I've really enjoyed the time we have spent together and getting to know one another. And that's all I'm going to say about it."

"Dating is for children; dating is for kids," Browne said. "Ronda and I started talking throughout the summer, and I'll say now that we are together. She's my woman, and I'm her man. There's no boyfriend-girlfriend stuff. There's no dating. We're together."

Browne has been Rousey's line of support after her recent high-profile UFC losses.

In an interview after her Holly Holm defeat, Rousey said she had thoughts of harming herself.

"I haven't told anybody that. I think I only told him that, but that was like what I was thinking," she said. "I was meant to have him when I was at my lowest for sure. I don't know if I would have made it without him."