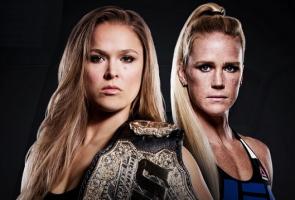 UFC President Dana White has confirmed that Ronda Rousey will get a rematch against bantamweight titleholder Holly Holm.

Holm defeated the confident Rousey at UFC 193 last month in a knockout that ended with a kick to the head in the second round of their match.

"I think that if we didn’t make the rematch, me and (UFC CEO) Lorenzo should probably lose our promoters' license," White told Mike & Mike. "Yeah, that fight’s going to happen. I don’t know when, but that’s the fight that will happen."

"Ronda Rousey has gone undefeated, taken the sport to another level, and was beating the best women in the world in 14 seconds or 30 seconds, so she deserves a rematch."

"Holly agrees she deserves a rematch. And we'll figure it out."

In the days after her win, Holm said she knew a rematch was coming.

"I’ll train just as hard, I'll train twice as hard for the rematch, because anyone who has been as successful as Ronda has obviously been a champion for a reason," she told Extra.

"She’s a very dominant athlete, a very hard-working athlete, so I know she'll be coming back with a vengeance and I'll have to be ready."