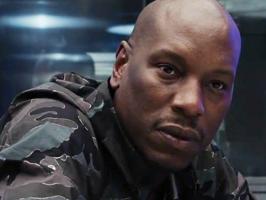 Tyrese Gibson is threatening to quit the Fast & Furious franchise if Dwayne Johnson is in the upcoming ninth film.

The feud began when Universal announced a standalone spin-off series starring Johnson and Jason Statham would hit theaters in 2019, the year the next 'Furious' film was originally supposed be released.

With the next 'Furious' moved to 2020, Gibson placed the blame squarely on Dwayne Johnson.

"I'm sorry to announce that if Dwayne is in Fast9 there will no more Roman Peirce. You mess with family and my daughters survival I mess with yours......... close your eyes dude you're a 'Clown'...... #CandyAssBitchMade. All my real one.... Men on integrity... my real ones out here stand UP."

"Spin off huh? Spin off these nuts selfish champ," he added. "Pause notice who's got his arms around my shoulder and who's standing alone - #OurChildrenMatter."

Gibson is currently engaged in a legal battle with his ex-wife over his daughter.

"I was never mad at The Rock - I was just mad that he was 'pitched' an idea privately and said yes to it without thinking of what I'm dealing with personally," Tyrese said in another post.

"I'm almost broke paying legal fees and is doing what we committed to doing for the #FastFans and #FastFamily cause the fast is tradition it's not just another Movie... Fast was created to COUNTER images of racism to counter that WE ARE NOT ONE RACE."

"So The Rock how does it feel bro?.... going home to your daughter every night.... it's was 60 days before I seen my baby..... and all I asked you to do 'privately' was NOT accept a role that would deeply effect us all."

"You are simply NOT the people's champ," he continued. "You are a selfish champ."

Of course, if the studio had to choose between Dwayne Johnson and Tyrese Gibson, they would choose the former's starpower everytime.