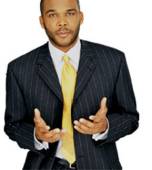 Tyler Perry's 'I Can Do Bad All By Myself' opened solidly on a weekend that is traditionally a slow time for studios as they transition between the summer blockbusters and fall releases.

In fact, the film's debut in top spot with an estimated $24 million marked the second time this year Perry has opened number one at the box office since 'Tyler Perry's Madea Goes to Jail' debuted with $41 million in February.

The PG-13 animated feature '9' also continued solidly with $10.9 million to take second place. The flick, which features a voice cast of Elijah Wood, John C. Reilly, Christopher Plummer and Jennifer Connelly, has made about $15.3 million since opening on Wednesday.

'Inglourious Basterds' followed in third with $6.5 million and 'The Final Destination' with another $5.5 million, however, new features 'Sorority Row' opened weakly with $5.3 million for sixth, and Kate Beckinsale (photos

)'s 'Whiteout' debuted even lower with just $5.1 million in seventh place. Note to producers: When you have Beckinsale, it helps if you don't dress her up in oversized coats for subzero temperatures.

'G.I. Joe' fell out of top ten after six weekends on the chart, while 'Gamer', unequivocally the worst movie we've seen all year, is on life support to stay on the list in only its second week.

Next weekend will see a host of new movies including Sony's 3D animated feature 'Cloudy with a Chance of Meatballs', Megan Fox (photos

Here's a complete rundown of the weekend box office: