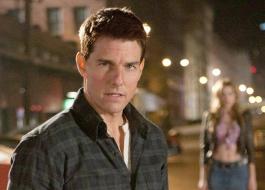 Here's something Tom Cruise probably never saw coming. The actor's 'Jack Reacher' was topped by Tyler Perry at the box office this weekend.

Perry's 'Boo! A Madea Halloween' opened with an estimated $27.6 million, besting the $23 million earned by Cruise's 'Jack Reacher: Never Go Back', according to studio estimates.

The film cost $20 million to produce compared to the 'Jack Reacher' sequel's $60 million, a large part of which was likely Cruise's A-list salary.

The first 'Jack Reacher' opened with $15.2 million in its slot before Christmas in 2012. It went on to gross $80 million domestically but made most of its bank internationally where it did $218 million.

The sequel will probably follow the same outline so it won't be a flop by any measure. However, it will certainly be a disappointment for Paramount.

The real bomb of the weekend was 20th Century Fox's comedy 'Keeping Up with the Joneses', starring Isla Fisher, Zack Galifianakis, Jon Hamm and Gal Gadot.

It had a mere $5.6 million opening after being torn to shreds by critics despite the much talked about makeout scene between Fisher and Gadot.