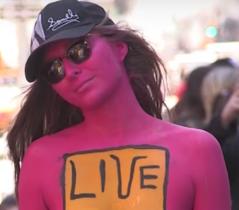 Called Body Notes and scheduled for June 9, the event would gather fully nude male and female models to be painted with "a personal message of his or her choosing."

Artist and founder Andy Golub says while there are no restrictions, he hopes people will pick messages that "bring them together."

"I'm very strongly encouraging people to say things that are heartfelt, but not divisive," he says.

The event is being co-sponsored by the Outdoor Co-Ed Topless Pulp Fiction Appreciation Society which stages topless group readings at parks. It's most recent meeting was held in Central Park earlier this month.

New York city has already granted permits for the event to held on Broadway between 43rd and 44th Streets around noon.