'Twilight' Fan Dies After Being Hit By Car At Comic-Con 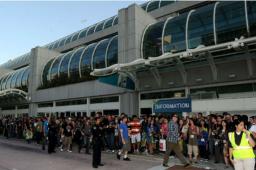 A 53-year-old woman died at San Diego's Comic-Con on Tuesday after being hit by a car while crossing the street to line up for a 'Twilight' panel.

The preliminary investigation has revealed that the woman was running across busy Harbor Drive. She tried to stop in her tracks after spotting oncoming traffic but it was too late and she tripped and fell into the car.

She sustained massive head trauma and was "bleeding profusely" when she was rushed to the hospital.

The 67-year-old driver who hit her cooperated with investigators and will not be cited, according to police.

The woman, known to her friends as Gisela G, had been one of the first in line on Sunday for a Thursday afternoon panel on 'The Twilight Saga: Breaking Dawn Part 2'.

"Lionsgate, Summit and the entire Twilight community are saddened by the death of a Comic-Con fan today due to a traffic accident during the hours leading up to this year's convention in San Diego," reads a statement.

"Our thoughts and condolences go out to the victim's family and friends. She will be respectfully remembered this Thursday in Hall H."