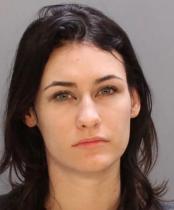 PHL 17 reporter Colleen Campbell has been fired after being arrested outside of Helium Comedy Club for assaulting a police officer on Sunday night.

This after the 28-year-old went off on a tirade against police after she was asked to leave the venue following multiple warnings for disrupting a show featuring comedian Craig Robinson.

Campbell kicked and punched staff on her way out and yelled "you guys are f---ing dictators… you f---ing c—k suckers."

"I did not do s—t, I stood there and laughed like the rest of the audience like I should. I did not disrupt anybody," she continued.

After the officer told Campbell to walk away, she called him a "f---ing piece of s—t" and spit towards a man standing nearby.

What Campbell didn't know was that she was being recorded by a shocked bystander who later posted the video on Facebook and described her as "this very obnoxious lady."

She is facing several charges including simple assault, hindering apprehension and failure to disperse. Campbell claims she wasn't herself and was "unknowingly drugged."

"My actions on that video are not the result of a handful of drinks spaced out over a couple of hours. I believe I may have been unknowingly drugged at some point that night," she tells Fox29.

"I did not receive medical testing while in custody because, as I recall, I was advised by personnel at the police station that such testing would delay the process of my being released."