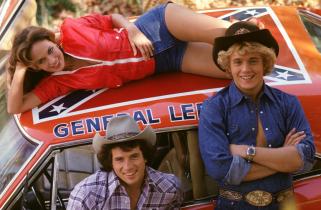 TV Land has pulled 'The Dukes of Hazzard' reruns from its schedule amid uproar over the confederate flag.

The flag is seen throughout the show since it's emblazoned on the roof of the show's iconic General Lee 1969 Dodge Charger.

The show's imagery has come under renewed criticism after the June 17 shooting in Charleston that left nine dead followed by the South Carolina governor's decision to take the flag down.

Walmart and other retailers have already stopped selling the flag and Warner Bros. has also paused production of toy replicas of the car.

'Dukes of Hazzard' star John Schneider defended the flag in a recent interview. saying: "Labeling anyone who has the flag a 'racist' seems unfair to those who are clearly never meanin' no harm."