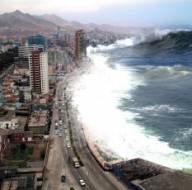 'Hereafter' has been pulled from Japanese cinemas after a catastrophic earthquake and tsunami hit the region.

A Warner Entertainment Japan spokesperson says the decision was made because the tsunami scenes in the film were "not appropriate" at this time, since they may be too close to the reality on the ground.

It starred Matt Damon as a factory worker who was able to communicate with the dead.

'Hereafter', which opened in Japan in late February, was scheduled to play at least until late March.