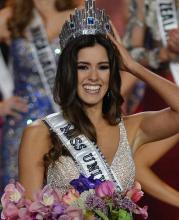 Donald Trump is firing back at Paulina Vega after Miss Universe criticized him for the comments he made about Mexicans.

The 22-year-old Colombian beauty queen said: "As a Colombian and Miss Universe, I want to show my support and validate the sentiments of the Latin community."

She went on to add that she was glad the Miss Universe pageant was independent of Trump, and that she wouldn't have accepted the crown if the organization "shared any anti-Latin sentiments or any type of racial biases."

"I strongly believe that dividing and categorizing humankind only holds it back," she continued. "Bending and embracing the differences that exist across humanity is the first step in actual and substantial development. We must strive together in order to improve the common good."

But Trump wasn't having any of it and fired back by calling her a hypocrite.

"Miss Universe, Paulina Vega, criticized me for telling the truth about illegal immigration, but then said she would keep the crown," he wrote on Twitter. "Hypocrite."