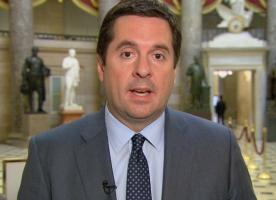 Much has been made of House Intelligence Committee chairman Devin Nunes' behavior in the last week.

Last Wednesday, in a rather unusual press conference, Nunes stated that "the intelligence community incidentally collected information" regarding communications between Trump and his team as part of their surveillance of foreign agents.

Despite being the head of the committee investigating links between Trump and Russia, Nunes went to the White House to share this information with the president without sharing the same with his colleagues on the House Intelligence Committee.

After reports surfaced this week about his whereabouts the night before, Nunes admitted that he had received this "classified information" on the grounds of the White House itself. He refused to reveal who provided him this information or exactly what it was and maintains the President didn't know about it.

White House Press Secretary Sean Spicer has been equally evasive about who cleared Nunes onto the grounds, which would be a simple matter of examining the visitor logs.

However, it may be for good reason. It's no secret that Nunes served as a member of President Trump's transition team but it appears not only was this sequence of events planned by the White House but the President may have inadvertently telegraphed it himself a week earlier.

In an interview with Fox News' Tucker Carlson on March 15, a full week ahead of the events, Trump told the host to hold tight about the new "things" that the committee would find.

"But, we will be submitting certain things and I will be perhaps speaking about this next week, but it's right now before the committee, and I think I want to leave it. I have a lot of confidence in the committee... I think you're going to find some very interesting items coming to the forefront over the next two weeks."

Not only did Trump mention that the committee would come across items they haven't seen yet but provided a clear timeline that he anticipated would result in him speaking about it "next week."

Couple this with the New Yorker's Ryan Lizza, who revealed yesterday that days before the sequence of events went down, a senior White House official had tipped him to where it was heading and the pieces begin to fall into place.

"A senior White House official told me, 'You'll see the setting of the predicate," Lizza writes he was told on the day FBI director James Comey was being questioned. "That's the thing to watch today. The White House clearly indicated to me that it knew Nunes would highlight this issue (incidental collection)... Watch Nunes today."

Of course, that's precisely what happened with Nunes opening statement being on the issue of incidental surveillance.

"The Intelligence Community has extremely strict procedures for handling information pertaining to any US citizens who are subject even to incidental surveillance, and this committee wants to insure all surveillance activities have followed all relevant laws, rules, and regulations," he said.

The same basis for which Nunes "found" evidence for days later that no one else has seen from a source he has said he will "never" talk about.

Nunes' actions have essentially sidelined the House Intelligence Committee, perhaps by design. The Chairman refuses to recuse himself from the investigation despite the overwhelming appearance of working on behalf of and coordinating with the very administration he's supposed to investigate.