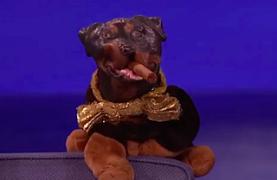 "I want to be optimistic Stephen, don't you think he can do what he promised and return us to a better time... like yesterday afternoon?," quipped the mutt.

"There were even some aspects of a Donald Trump presidency that had Triumph wagging his tail, like when he said, 'We'll finally get to see Donald's plan to destroy ISIS, which I assume is to buy it and run it like one of his casinos."