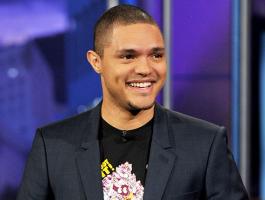 In a sit-down chat with CNN's Van Jones on 'The Messy Truth' Wednesday night, Trevor Noah talked about what he believed made Donald Trump different from other politicians.

"I watch Trump through a different filter," Noah told Jones. "When I see Trump, I see a stand-up comedian."

Talking about Trump's recent address to the joint session of congress, during which the President recognized the widow of Navy SEAL Ryan Owens, Noah said: "During that moment with Ryan's wife, Trump even told a joke and people laughed and people connected. I was like, 'This is scary. This is good.'"

Noah, who was born in South Africa, defended Trump supporters and said he didn't think they were racist but insisted that same logic should extend to immigrants.

"Not every Trump supporter is racist, you could even argue that not most of them are racist," he said. "But then I would turn that and say for Trump supporters, why would you say all immigrants are criminals? Would you not say that same logic should be applied to them?"