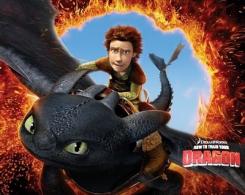 'How to Train Your Dragon' breathed some fire into the box-office with a $43 million opening weekend, easily beating out new comedy 'Hot Tub Time Machine' -- which didn't even get to the $15 million mark.

'Hot Tub Time Machine', starring John Cusack, received a number of positive reviews and comparisons to 'The Hangover' but it was unable to translate the hype into success at the box office. The studio was hoping for an opening closer to the $20 million mark.

And having lost its 3D screens to 'Dragon', 'Alice in Wonderland', which had been in top spot the previous three weekends, slipped to second place with $17.3 million. A fact that highlights the roughly 4,000 screens capable of showing 3D movies is not enough to handle two full wide-release films at the same time.

Meanwhile, after a phenomenal 15-week run, 'Avatar' finally dropped out of the top ten at the box office, with its domestic total now at $740.4 million and worldwide take at $2.7 billion.

Finally, 'Diary of a Wimpy Kid', which beat out Jennifer Aniston (photos

)'s and Gerard Butler's 'The Bounty Hunter' last weekend, fell below the romantic comedy with $10 million.

Here's a rundown of the weekend box office: