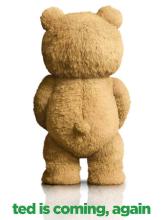 Universal Pictures has released its first extended trailer for 'Ted 2'.

Seth MacFarlane returns as writer, director and voice of Ted and is joined once again by Mark Wahlberg.

The sequel sees Ted getting married and trying to start a family with his new wife (Jessica Barth). But being a bear he faces some obstacles that includes Mark Wahlberg trying to be a sperm donor and ends with the character slipping and sliding.

Along the way, Ted's troubles bring in Amanda Seyfried (photos

) as their lawyer to prove he is in fact a person.

'Ted 2' has a release date of June 26. We're hearing another version of the trailer will air during the Super Bowl that will feature Ted Brady as one of the donors for the stuffed bear.