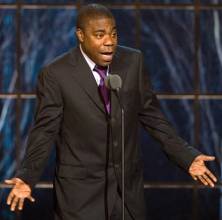 Tracy Morgan is now in hot water again for joking about the mentally challenged in his return to stand-up.

Nonprofit organization The Arc, which assists people with intellectual and developmental disabilities, is demanding an apology from the comedian for remarks he made in a routine over the weekend.

This after Morgan joked about "retarded kids" and compared them to "chimps."

"Don't mess with women who have retarded kids," he said. "Them young retarded males is strong. They're strong like chimps."

Morgan then followed that up with a joke about hooking up with a girl he called "a cripple" with a dialysis machine and a prosthetic arm.

"Tracy Morgan should apologize immediately," says The Arc's CEO, Peter Berns. "This quote is far too offensive to be excused as comedy, and it is very hurtful to people with intellectual and developmental disabilities and their families."

"Mr. Morgan has an incredibly powerful platform from which to fix this, and if he's learned anything in the last few weeks, he can't bomb this apology."

The appearance was Morgan's first performance since his infamous homophobic rant in Nashville, Tennessee earlier this month.

"I don't have that in me," Morgan said on that note. "I believe gay, straight, anybody, everybody's supposed to be happy in this world, man."

The comedian has repeatedly apologized for the rant since but it remains to be seen whether he will bow down to the disabilities group.