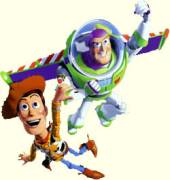 'Toy Story 3' has become the first animated film, and only the seventh movie ever, to cross the $1 billion mark at the worldwide box office.

"'Toy Story 3' will cross the $1 billion mark at the global box office today, joining 'Alice in Wonderland' as the second $1 billion film this year from The Walt Disney Studios – the first studio in history to accomplish this feat," says Disney in a statement.

"It’s been an incredible year as we saw the Pixar team bring Buzz and Woody back to the big screen and watched Tim Burton’s vision for Alice in Wonderland take the world by storm," says Rich Ross, Chairman. "These box office triumphs prove that creative storytelling brought to life by imaginative, inspired and talented professionals is something audiences respond to the world over."

The 'Toy Story' sequel has been a hit internationally and has, in fact, earned more than $592.9 million abroad.

Latin American audiences have contributed $138 million, making it the highest grossing Disney film ever released in the region. It also been the most successful UK release in Disney history. In Japan, the film has taken in $111.2 million and spent five consecutive weeks as the top movie.

As for 'Alice in Wonderland', although the movie was blasted critically, it still managed to take in $1.02 billion to make it the fifth highest grossing film in global box office history.