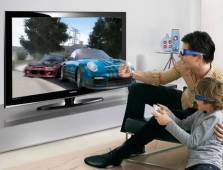 Toshiba has developing technology for a 3-D television that won't require special glasses.

Unlike conventional 3-D TVs now on sale, such as those from rivals Panasonic and Sony that require the viewer to wear special glasses, the televisions will make a three dimensional effect visible to the naked eye.

The new technology will enable viewers to view 3-D content from numerous viewing positions and also provide less strain to the eyes since stereoscopic images are seen on the screen, instead of different images to viewers' right and left eyes.

It's expected to provide a similar experience to that seen in the upcoming Nintendo 3DS, the official successor to its popular dual-screen games console.

The technology, known in the business as autosterescopic 3D, was thought to be at least a few years away from commercial viability. However, according to the report, Toshiba plans to have it on the market by the end of the year.

Electronics manufacturers have been investing heavily in 3-D technology for televisions. However, sales have been slow to come by with the need for viewers to wear special glasses.

But at least one of Toshiba's competitors said last month that it doesn't think autostereoscopy works.

"It’s not foreseeable for the immediate future," said Peter Fannon, Panasonic’s vice president of technology policy. "Everyone has looked at these elements and it just doesn’t work yet for 3D in the home."