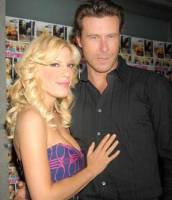 Tori Spelling, who is pregnant with her third child, is blaming paparazzi after crashing her car into a wall while driving her two children to school.

"Paparazzi chased me with the kids to school," Spelling writes on Twitter. "I was trying to get away from him and had a pretty big accident. Took down whole wall of school."

"He then still got out to try to get pics. Ten school moms chased him away. What will it take? Someone dying for paparazzi to stop?"

"Going to doctor now to check on baby," she adds. "I think it's just shock."

A friend of Spelling tells 'People' that "the photographer followed her into the driveway of the school. She pulled into the driveway and tried to get away from him. She reversed to leave and then hit the wall."

An LAPD spokesperson says no injuries were reported and no citations were issued to anyone involved, including the paparazzo.