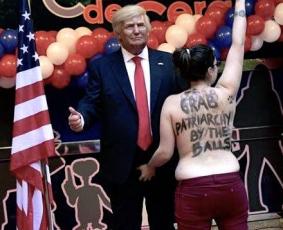 A topless activist belonging to the feminist group FEMEN delivered her own message during the unveiling of a Donald Trump statue at Madrid's wax museum.

The woman ran past security ropes and attacked the life-size wax statue of the President-elect by placing her hands on the statue's crotch while yelling "grab patriarchy by the balls."

With the same message on her back, the woman screamed for several minutes while security and staff attempted to esscort her out of the museum.

"FEMEN just grabbed Trump's statue by the balls in Madrid," the group boasted on Twitter.

Of course, the actions were a callback to the infamous Access Hollywood recording in Trump bragged about being able to grab women "by the pussy."

A museum spokesman said he didn't want to the wax statue to be destroyed due to words of the President-Elect and suggested to Reuters that: "If they want to do this they should do it directly to him. This is too easy."