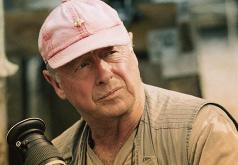 Tony Scott, director of 'Top Gun' and 'Days of Thunder', has died of an apparent suicide after jumping from a Los Angeles County bridge. He was 68.

Police found contact information in his car, parked on the Vincent Thomas Bridge in San Pedro, California, which then led them to a suicide note in Scott's office.

The coroner's department and police report state that he jumped "without hesitation."

In a 1995 interview, Tony Scott said what he was most afraid of was failing.

"The biggest edge I live on is directing. That's the most scary, dangerous thing you can do in your life," Scott said. "The scariest thing in my life is the first morning of production on all my movies. It's the fear of failing, the loss of face and a sense of guilt that everybody puts their faith in you and not coming through."

Tony Scott was seven years younger than his brother and partner, Ridley Scott, in Scott Free Productions, which produced 'Prometheus'.

Scott had a sequel to 'Top Gun' in development and mini-series 'Coma', produced with his brother about to premiere. Over his career, he was also involved in producing 'Man on Fire', 'Deja Vu', 'The Taking of Pelham 123', 'Unstoppable' and several episodes of CBS' 'Numb3rs'.