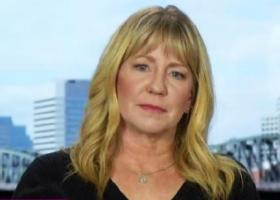 Tonya Harding almost ended a tense interview on 'Good Morning Britain' with Piers Morgan after the host questioned whether she was really the victim.

Harding has been making the rounds following the release of 'I, Tonya', a film that recounts the attack on Nancy Kerrigan that resulted in Harding's ban from US figure skating in 1994 after she plead guilty to conspiring to hinder prosecution.

"Maybe it suits you to play the victim," Morgan said, "but I think the victim in all of this wasn't you. It was Nancy Kerrigan who had her Olympic dream shattered quite literally in her legs."

"Thank you so much. I appreciate being on your show, but I think I'm going to have to say have a good night," Harding responded.

After Morgan questioned her comment, Harding claimed she hadn't been allowed to finish her response.

"I think that many people are the victims of abuse every single day and can't stand up for themselves," she said. "People need to be able to understand that we need to stand united and that abuse should not be happening anymore. We all know this."

When Morgan said Kerrigan was the one who suffered the abuse, Harding agreed: "Yes, she was. But you also have to realize that there's a lot of things going on."

"People don't seem to understand what I was going through, so that's why I decided to do this movie."

Morgan asked Harding, as many have speculated, whether she knew the attack was going to happen.

"No, I did not know anything prior," she said. "I did find out after the fact."

In a separate interview with 'Good Morning America', Harding denied being a part of her ex-husband Jeff Gillooly's and his accomplice Shawn Eckardt's plans to hurt Kerrigan but admitted she overheard them months before the incident.

"I did, however, overhear them talking about stuff where, 'Well, maybe we should take somebody out so we can make sure she gets on the team,'" Harding told Amy Robach, "and I remember telling them, 'What the hell are you talking about? I can skate.'"