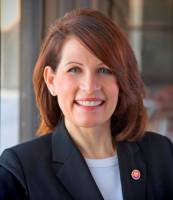 Rolling Stone magazine reports that Petty's management sent Bachmann a cease and desist letter after she played the tune while announcing her candidacy for the Republican presidential nomination.

This isn't the first time that Petty has taken issue with his songs being used in the political arena.

In 2000, the singer told George W. Bush to stop using 'I Won't Back Down' because it implied he endorsed Bush.

However, he did seemingly allow Hilary Clinton to incorporate 'American Girl' into her failed attempt to nab the 2008 Democratic presidential nomination.