Tom Hiddleston Gets Testy Over Taylor Swift: 'What Should I Regret?' 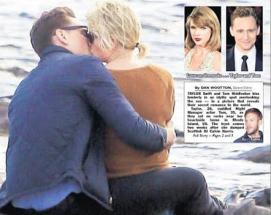 In an interview with The Telegraph, the 36-year-old 'Kong: Skull Island' star got testy when asked about his short-lived romance but very public romance with Swift.

Asked if he regretted "the publicity and gossip the romance engendered," he replied: "What should I regret, in your mind? I would rather not talk about this, if that's alright."

The paper says the actor then took "a long pause, with his hand on his chin."

"I'm just thinking about this. Everyone is entitled to a private life," he then responded. "I love what I do and I dedicate myself with absolute commitment to making great art and great entertainment, and in my mind I don't conflict the two."

"My work is in the public sphere and I have a private life. And those two things are separate."

Interestingly, in an earlier interview with GQ where he posed with the same question, Hiddleston said he had no regrets.

"You have to fight for love. You can't live in fear of what people might say," he explained. "You know, you have to be true to yourself. I'm not going to live my life in hiding."

"Taylor is an amazing woman," he said. "She's generous and kind and lovely, and we had the best time."