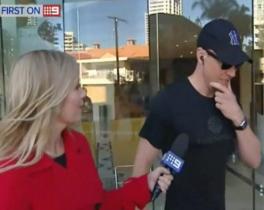 ) during a run in Broadbeach, Australia.

The 35-year-old actor, who arrived with Swift in Australia last week, is in the country to reprise his role as Loki in 'Thor: Ragnarok'.

He was out on a morning jog when he was approached by a local reporter, who asked: "How is Taylor enjoying the beautiful Gold Coast?"

"Uh, I... I'm not going to answer that if that's all right," Hiddleston replied.

When he came back around after a run, he was asked: "What are you and your girlfriend looking forward to doing on the Gold Coast?"

"I don't know," Hiddleston awkwardly responded. "It's just good to be back."

After news had spread that the couple was staying in the area, Hiddleston posed for photos with Swift's fans even though the singer decided to stay inside their penthouse apartment.