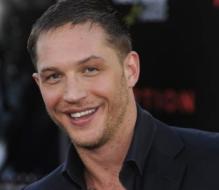 Although he hasn't put pen to paper, Daniel Craig is still the most likely actor to play James Bond for another installment.

But that isn't stopping the speculation about who should take on the role if the franchise opted for a fresh face. One of those names has been Tom Hardy.

Hardy was asked about the role in a recent interview but rather than talk about himself, he campaigned for Christopher Nolan to direct the next Bond film.

"You know, there's a saying amongst us in the fraternity of acting, and in the fellowship of my peer group, that if you talk about it you're automatically out of the race," Hardy told the Daily Best. "So I can't possibly comment on that one!"

"But Chris Nolan, what a fantastic director for a Bond movie. Because Daniel is so good, and what Sam Mendes and Barbara Broccoli have done has been so impressive, that it would be a very hard re-imagination to follow after."

"I wonder what the next installment of that franchise would become, and I think when you mention someone like Christopher Nolan, that's a very powerful figure to bring into that world who could bring something new and create something profound…again."

Of course, Nolan is one of the few filmmakers who doesn't really need the cache of Bond to draw an audience but it would certainly make for an interesting mix.