Tom Arnold: I Have Trump's 'Racist' and 'Mean' Rants From 'Apprentice' 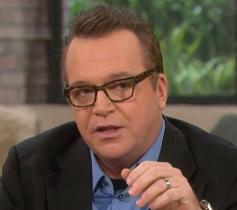 Tom Arnold says he has unreleased outtakes of Donald Trump saying "every offensive, racist thing ever" on 'The Apprentice'.

"I have the outtakes to The Apprentice where he says every bad thing ever, every offensive, racist thing ever," Arnold told Dori Monson's KIRO Radio show.

"It was him sitting in that chair saying the N-word, saying the C-word, calling his son a retard, just being so mean to his own children."

Arnold said he received the clips from people who worked on 'The Apprentice' and it was meant as a "funny Christmas video" because they didn't think Trump would win.

"When the people sent it to me, it was funny. Hundreds of people have seen these. It was sort of a Christmas video they put together. He wasn't going to be President of the United States."

Arnold explained when it began to look like Trump had a chance, he got a call asking him to release the footage.

"The Sunday before the election, I get a call from Schwarzenegger's agent, sitting next to Clinton. They said, 'I need you to release him saying the N-word.' I said, 'Well, now these people – two editors and an associate producer — are scared to death. They're scared of his people, they're scared that they'll never work again, there's a $5 million confidentiality agreement.'"

The actor-comedian didn't oblige but added he didn't think it would've made a difference anyway.

"I think if the people that like him saw him saying the N-word, he's sitting matter-of-factly in front of there has to be 30 people there, and he's matter-of-factly saying all of this stuff. So I think they would have liked him more, the people. For being politically incorrect."