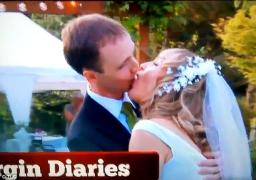 The network aired its first episode of the reality series that follows people who have remained virgins into their 30s and 40s last December.

The first of the two upcoming episodes will feature a 34-year-old Mormon who lives in his parents' basement and takes his mother to bars to help him meet women. The second will follow a 29-year-old lesbian virgin who loves Star Wars and dodgeball.

Some critics have dubbed 'Virgin Diaries' as the network's "newest gawk-fest" and described the participants as “exploitation victims."

"Losing one's virginity is a big life decision," he says. "It seemed like one of those seminal life moments that's interesting to follow for TLC."

"We're not trying to make light of this or treat it in a sort of trivial way. We want to document these peoples' stories and why they make this decision."

Here's the promo from the series debut, which featured the now infamously awkward kiss: