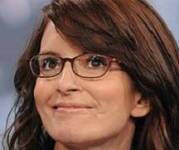 Tina Fey's career went into overdrive with her Sarah Palin skits this fall, but she's always refused to talk about the origin of the scar on the left side of her face.

The most Fey said about the scar was that it was a "childhood injury that was kind of grim." However, in the latest issue of 'Vanity Fair', her husband explains it was the result of a slashing incident that happened when she was only five.

"It was in the front yard of her house and somebody just came up, and she just thought somebody marked her with a pen," husband Jeff Richmond says of the incident.

"That scar was fascinating to me," he recalls. "This is somebody who, no matter what it was, has gone through something. And I think it really informs the way she thinks about her life. When you have that kind of thing happen to you, that makes you scared of certain things, that makes you frightened of different things, your comedy comes out in a different kind of way, and it also makes you feel for people."

Fey says she's never talked about it because "it's impossible to talk about it without somehow seemingly exploiting it and glorifying it," and it also "kind of bums my parents."

"It's really almost like I'm able to forget about it, until I was on-camera, and it became a thing of `Oh, I guess we should use this side' or whatever. Everybody's got a better side."

Fey also talks about the pilot episode of '30 Rock' in which she danced onstage with a stripper, but says she's not a big fan of strip clubs in general: "I love to play strippers and to imitate them... I love using that idea for comedy, but the idea of actually going there?"