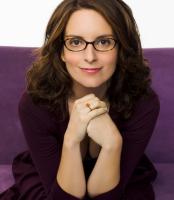 'Saturday Night Live' opened its show this weekend with a cold open featuring Tina Fey in her return as Sarah Palin to endorses Donald Trump for president.

Darrell Hammond played Trump at an Iowa campaign stop as he received special praise from the former Alaska governor.

"I wanted to take a break from my full-time career of writing things on Facebook to fly down here and lend my support to the next president, Donald J. Trump," Fey's Palin said.

"I'm here because we Americans are strugglin', whether we've lost our jobs at the factory or our reality show about Alaska."

"I'm here for all you teachers and teamsters, you farmers and charmers, whether you're a mom and two broke girls or three men and a baby or a rock in roller, Holy Roller pushing stroller, pro bowler with an abscessed molar," said Fey in character.

"She's a firecracker. She's a real pistol. She's crazy, isn't she? I hope nobody's allergic to nuts, because we got a big one here," Trump added. "She sounds like a greeting card from a Chinese dollar store."

"I'm just here because he promised me a spot in his Cabinet," Fey said. "And I belong in a cabinet because I'm full of spice and I got a great rack."

For those of you outside the US: