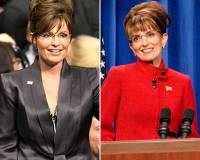 On the show to promote their comedy 'Sisters', Tina Fey and Amy Poehler brought back their versions of Sarah Palin and Hillary Clinton on 'Saturday Night Live'.

"Do what you believe in your spirit but also America," advised Fey's Palin. "Also if it gets too hard, just quit. Who cares?"