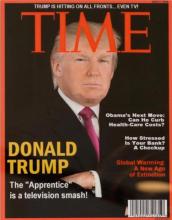 TIME Magazine has now officially asked President Donald Trump to remove the fake covers of the publication hanging in several of his golf clubs and resorts.

After the Washington Post revealed the March 1, 2009 cover was a fake, it has confirmed framed copies of the cover have been spotted in more than a handful of Trump's properties around the world.

The cover features a headline reading: "Donald Trump: The 'Apprentice' is a television smash!" and "TRUMP IS HITTING ON ALL FRONTS... EVEN TV!!"

A reporter decided to investigate the cover after he noticed it looked odd.

The White House has declined comment, saying it does not comment on "decor at Trump Golf clubs", and referred inquires to the Trump Organization.

The fake covers have been framed and proudly hung everywhere from Florida to Scotland.