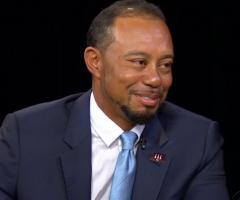 In an interview with Charlie Rose, Tiger Woods revealed his one life regret and it wasn't cheating on wife Elin Nordegren with multiple women.

The 40-year-old golfer instead said his regret was not delaying the "burden" that comes with being one of the world's most recognizable athletes and keeping his anonymity for just a bit longer.

"Well, it's a burden in the sense that it — the amount of obligations that I have at a tournament," he said.

"The anonymity that was lost that, you know, one … you know, if you look back, the only regret I have in life is not spending another year at Stanford, and I wish I would've had one more year."

Rose, who was obviously expecting the answer to be about Woods' affairs with multiple women during his marriage to Nordegren, was surprised with the answer and pressed further.

"That's the only regret. I wish I had spent an extra year," Woods reiterated.

"Of all the things that's happened to you?!," Rose asked again.

"All the things and that's all," Woods smiled.

However, the interview didn't end without a reference to his ex wife as Woods admitted he's "made a bunch of mistakes" and still considers Elin one of his "best friends."