Tiger Woods on Divorce: 'It's a Sad Time' 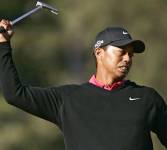 Tiger Woods says even though his divorce is now final, he's not exactly 'relieved'.

"I don't think that's the word," Woods said at the Barclays tournament on Wednesday. "I think it's just more sadness. Because I don't think you ever go into a marriage looking to get divorced. That's the thing. That's why it is sad."

In her first interview since the divorce, Elin Nordegren said she had "been through hell" with the ordeal and explained she was embarrassed that she hadn't caught on to Tiger's cheating ways earlier than she did.

Woods publicly confessed to cheating on his wife in December, one month after his highly publicized car accident that landed the golfer on tabloid covers and turned his perfect world upside down. They were married for five years and have two young children.

"My actions certainly led us to this decision. And I've certainly made a lot of errors in my life and that's something I'm going to have to live with."

"I came back as part of my job, it's what I do. Me coming back and playing had nothing to do with our decision to move our separate ways."

"As far as my game and practicing that's been secondary. We're trying to get our kids situated to our new living conditions and how that's going to be. That's where our focus is at right now."

"You have to find the positives even though there are a lot of negatives. I think that's actually a good thing because I learned a lot about myself and how I can become a better person."

Woods, who has struggled since returning, is scheduled to play in The Barclays tournament in New Jersey.