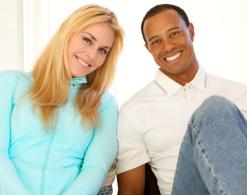 This after the National Enquirer claimed Woods and Boyd have "been having a steamy affair for several months. When Lindsey found out about their affair in the early spring, she hit the roof and kicked Tiger to the curb!"

Woods and Vonn announced that they had broken up after three years of dating in May, saying they "mutually decided" to end their relationship due to their "hectic lives."

"I couldn't deny this more vehemently," Woods' agent Mark Steinberg tells 'Golfweek'. "There is less than zero strand of truth to it. 100 percent false. 100 percent fabricated and zero credence."