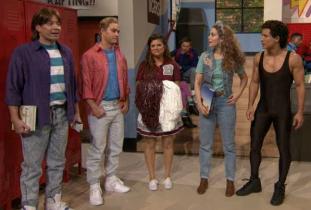 Tiffani Thiessen talks to Jimmy Fallon about the viral hit that was the 'Saved by the Bell' reunion sketch on 'The Tonight Show'.

Thiessen, who is expecting her second child, also confirmed that the baby bump in the sketch was 100% real.

"Everybody thought it was part of the skit," she laughed. "I was like no, people, it's real."

"It was the biggest thing that we've ever done... I think ever on our show," said Fallon.

"All of us knew it would do well because of about people wanting to see the reunion," said Thiessen. "I never in my life thought it was going to be like that."