'Thursday Night Football' To Rotate Between CBS and NBC Next Season 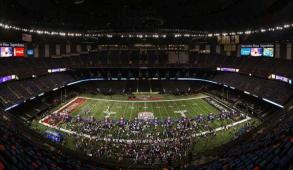 However, the truth is the network is putting its own spin on the news that 'Thursday Night Football' will rotate between CBS, NBC and the NFL Network next season.

The two-year contracts are worth $450 million a year for the 10 games split between CBS and NBC. That's up from the $300 million CBS paid for eight games in 2015.

Along with the added revenue, it gives the NFL another network it will be promoted on NBCUniversal's lineup of channels.

"We are continuing to make Thursday Night Football bigger and better. CBS has played an integral role over the last two seasons in helping build Thursdays as a night for NFL football, and we’re excited to have them on board again," says Commissioner Goodell.

"At the same time, we're thrilled to add NBC to the mix, a trusted partner with a proven track record of success broadcasting NFL football in primetime."

Goodell explains "our mission when we first put games on Thursday nights in 2006 was to work strategically to make Thursdays a night for NFL football in the mold of what Monday and Sunday nights mean to millions of fans across the country."