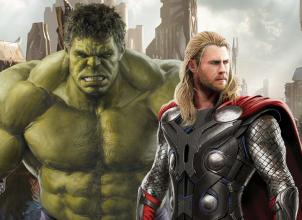 Photographer Glenn Hunt may have just revealed Odin's fate at the end of 'Thor: The Dark World'.

You may recall at the end of the Marvel film, Thor was given the chance to finally rule Asgard as king by his father Odin (Anthony Hopkins).

But Thor turned down the opportunity by saying "I'd rather be a good man than a great king." The twist was that it was actually Loki, who took the form of Odin and apparently dispatched of the king. The question has been where?

It appears the answer to that is Odin was banished to Earth with him apparently living as a homeless man in New York city.

The photos also confirm Thor and Loki are once again working together and evidently looking for their father, possibly because a new threat is coming to Asgard.

'Thor: Ragnarok' is currently filming in Brisbane, Australia, which is being staged to look like New York. It has a release date of November 3, 2017.