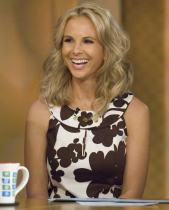 Elisabeth Hasselbeck, co-host of ABC's 'The View', has been accused of plagiarism.

In a lawsuit filed in Massachusetts, Susan Hassett, who wrote a book on celiac disease, alleges that Hasselbeck lifted text "word for word" from her publication.

Hassett says she mailed Hasselbeck a copy of her 'Living With Celiac Disease' after the TV personality revealed she had the illness and wanted to help her spread awareness about the condition.

The 32-year-old said she discovered she had it after she appeared on 'Survivor' in 2001.

But the author says months later she was surprised to find her work in Hasselbeck's 'G-Free Diet: A Gluten-Free Survival Guide' book without her permission -- including the same list of scientific names for grains containing gluten.

She claims Hasselbeck's book, which made it to The New York Times best seller list, not only "includes dozens of paraphrased as well as word for word regurgitations of phrases and scrupulously researched factual data entries" but also features a similar structure and organization.

Hassett is seeking compensation for profits from the book and wants it removed from distribution.

Elisabeth has, of course, rejected the allegations and says she worked "diligently and tirelessly" on the book.