'The Social Network' Named Best Film By National Board of Review 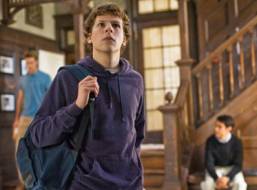 The National Board of Review, widely considered a harbinger of the Academy Awards, has named 'The Social Network' as the best film of the year.

"We believe the film portrays a dramatic story that will stand up over time and appeal to many generations," says NBR president Annie Schulhof.

"With 'The Social Network' you had very strong elements that were very much appreciated: the direction, the writing, the acting, its great storytelling. That spoke to the very diverse landscape of the National Board of Review."

While last year's winner for best picture, 'Up in the Air', failed to score the same prize at the Oscars, the NBR's previous two winners, 'Slumdog Millionaire' and 'No Country For Old Men', did follow up on Oscar night.

Meanwhile, the best actress prize went to Lesley Manville for her role as a tipsy single in the British film 'Another Year'. Supporting honors went to Christian Bale, for 'The Fighter' and Jacki Weaver in Australian crime drama 'Animal Kingdom'.

'Toy Story 3' won best animated feature, best documentary went to the 'Waiting for Superman', which details the US education system, and the best foreign language film was 'Of Gods and Men'.