'The Office' To End After Upcoming Ninth Season 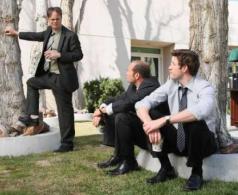 NBC's The Office is set to end after its upcoming ninth season.

Showrunner Greg Daniels announced the news during a conference call with reporters on Tuesday: "This year feels like the last chance to make an artistic ending for the show. This will be the last season of 'The Office', and we're planning a big exciting last season."

Daniels said the show will also finally reveal who's been behind the camera: "All questions will be answered this year. We're going to see who's behind the documentary."

"As we head into the homestretch, we have a lot of exciting things I've been wanting to do since season two. Now that we know we have an end date we can blow things up and take some chances and it will be very freeing, creatively."

"At some point you have a choice: to always tell the beginnings of stories and the middles or to allow a story to end, and I think endings can be very powerful and meaningful pieces of the story. If we didn't let it end this year, I don't know if we would have been able to tell the endings for so many characters that I really want to know the endings for."

He also hinted at what else viewers can expect: "We will be doing more character arcs, and more drama in the Jim and Pam storyline. We are planning some big surprises. I'm guessing the show will feel more like Dunder-Mifflin from before the Sabre merger."

"The real heart of the show are these arcs that allow these characters to have ongoing stories. It's all going to be set up in the premiere. There's so much to pay off from nine seasons, so many great characters, that my biggest concern is just tacking in these great ideas that the writing staff has on the walls and making sure we hit all of them or at least squeeze as many into the ending."

Daniels, who is taking over from Paul Lieberstein, who is prepping a spinoff, added he hoped Steve Carell could return for at least a few episodes to reprise his role as Michael Scott, but he isn't counting on it.

"We would certainly wish for it," Daniels said. "It would be fantastic if he would return. But we'll see."

The final season of 'The Office' premieres on September 20 on NBC.