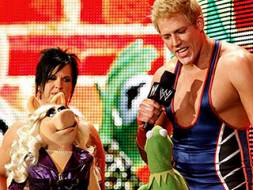 After Jack Swagger threatens to turn Piggy into a ham sandwich, Kermit has a comeback for Vickie Guerrero.

But the fun is short-lived after Swagger holds his mouth shut then Cody Rhodes puts a bag over Kermit's head.