'The Kennedys' Miniseries Will Finally Air On ReelzChannel 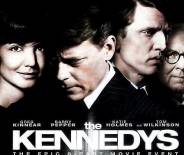 Sent packing by the History channel, 'The Kennedys' has finally found a new home.

ReelzChannel has network announced that the multimillion-dollar miniseries will premiere in the United States on April 3.

This after producers of the project struck a deal with the cable network to air the 8-part miniseries, which was abruptly pulled from the History channel amid pressure from the Kennedys.

Specifically Caroline Kennedy, who has a book deal with Disney's publishing division. She reportedly told the A&E Television Networks group board, which owns History, that she wouldn't cooperate in promotion of the book -- which is to include previously unreleased interviews with Jackie Kennedy -- if the network went ahead with the miniseries.

"While the film is produced and acted with the highest quality, after viewing the final product in its totality, we have concluded this dramatic interpretation is not a fit for the History brand," the channel said at the time.

ReelzChannel, which is currently available in 60 million homes, is hoping the project will push forward carriage from cable operators that do not already carry the channel, including Cablevision and Cox.

"One of the benefits of being an independent network is that you can be an independent voice and you don't have to worry about corporate pressure or political pressure," says ReelzChannel CEO Stan Hubbard. "This is a project that deserves to be seen."

"The cast put their heart and soul into this, and with great care to accuracy of circumstances and visuals. We're so thrilled and proud of being able to step up and help this story be told that they so carefully created."

"We think it will drive ratings and put a spotlight on this network that has never been on it before."